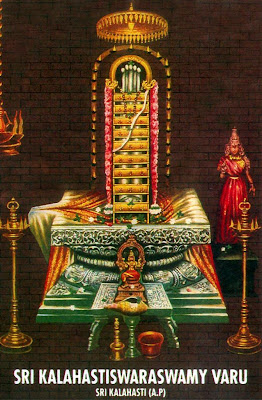 There are five very important Shiva temples in where the Lord is worshiped as manifestation of five elements – earth, water, air, sky & fire. These temples are called panchabhoota sthalam. Although relatively unknown in other parts of the country, they hold much religious importance here. These are important ancient Shiva Kshetras (Shiva Temples) of .
Srikalahasti, one of the panchabhoota sthalam, is the Vayu Sthalam representing Air. The others are - Tiruvannamalai (Thejo sthalam - Fire), Kanchipuram (Prithvi sthalam - Earth), Tiruvanaikaval (Appu sthalam - Water) & Chidambaram (Akasa sthalam - Sky).
Importance: Srikalahasti is one of the ancient temples included in the Saiva pilgrimages and is popularly known as "Dakshina Kailasam". Primary deity is Sri Kalahastheeswara Swami (Shiva) with consort Gnana Prasunambika Devi (Parvati).

The Lingam here is swayambhu, and it is white in colour. The Main lingam is untouched by the human beings, even by the priest. Abhishekam is done by pouring a mixutre of water, milk, camphor and panchamrita. Sandal paste, flowers, and the sacred thread are offerred to the Uthsava murthi, not the main Lingam. Even today the flame placed in Garbhagraha inside the temple flickers indicating the presence of the wind while there is no entry of wind to disturb the flame. The air is just sufficient to breathe in. This according to a belief is the existence of Shiva in the temple

The goddess here is Parvati as Gnana Prasunanmba and is said to be the sister of Lord Venkateswara at the Tirumala temple. According to another legend, Parvati was once cursed by Shiva to leave off her heavenly body and become a human. She meditated here, and was finally blessed by Lord Shiva, who not only restored her to her original status but also endowed her with the highest of divine knowledge. It is believed that the goddess with divine powers here has cured women who were possessed by evil spirits. 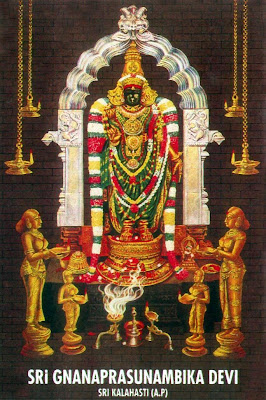 The main festival in this temple is Mahashivratri, which lasts for 10 days.

Patal Ganapati (Lord Ganesha’s underground temple) - Situated just before the main , Patal Ganapati is associated with the old Sivalingam beneath the temple. It is said that the idol of Lord Ganesha here marks the bed of the river flowing by the temple. One cannot see the Old Siva Lingam (related to the old story of SriKalaHasti) beneath the temple but can imagine it on seeing Lord Ganapati. This unique small shrine is built about 30 feet below the ground with small entrance above and flight of stairs for descent to the shrine. All devotees avail the darshan of this supreme deity - Vigneswara for trouble free existence. The idol is modest sized, ardent devotees worship with Karpura aarti. According to legends, many sages and seers did penance here and were blessed with his Sakshatkara. 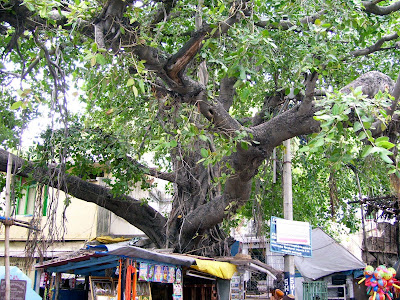 Location: Srikalahasti, about at 38 km from Tirupati, is a municipality town in Chittoor District of Andhra. It is located on the banks of the river Swarnamukhi. The river Swarnamukhi got its name from a belief that gold was found in its stream. Swarna means gold and Swarnamukhi means gold faced in Sanskrit. Swarnamukhi is a sacred river, said to have been brought to earth by Agastya Muni. It is also called Uttara Vahini, because at this place it flows south to north, which is unusual.

good effort with useful but not common information for religious tourists. Content can be brief.

i believe very few people have knowledge about this devine place. thank you vineet ji for elaborately explaining the sacred of this place.

i believe very few people have knowledge about this divine place. thank you vineet ji for elaborately explaining the sacred and spiritual existence of this place

An rich casket of information. Though I haven't scanned the contents in detail, I can make out the effort that has gone into it. You have done a remarkable job. Though I have never seen the place myself, the well nuanced & structured narrative inspires me to actually plan a visit.